Have you been diagnosed with a new illness, or do you find yourself starting to experience chronic pain? You’re not alone – 133 million Americans are also dealing with this. That’s 40% of the population! And many of those suffering from new and/or undiagnosed illnesses, along with chronic pain, are often told about what diet changes to make for this new ailment, as well as personal examples of “cures” to your disease through food. If you’ve never had an eating disorder (ED), this might not seem a problem. But for the millions of Americans with a diagnosed ED, this can be so triggering.

When someone is in pain, they feel more desperate for anything that will help alleviate their symptoms. A simple internet search of one’s symptoms will often verify that many of the supposed remedies are diet and food related. There are a thousand and one different opinions on what one should add or remove from a diet to cure said illness. What can be even more frustrating is that these recommendations will often conflict with each other. One person says don’t eat this or drink that, another person says that it’s fine!

Research has started to validate the correlation between chronic illnesses and the development of eating disorders. And based on my own anecdotal evidence as a therapist, I have to agree. I have had an overwhelming amount of clients with a dual diagnosis of a chronic illness and an ED. This can be a difficult road to recovery for these clients, and they experience a unique set of challenges to overcome. 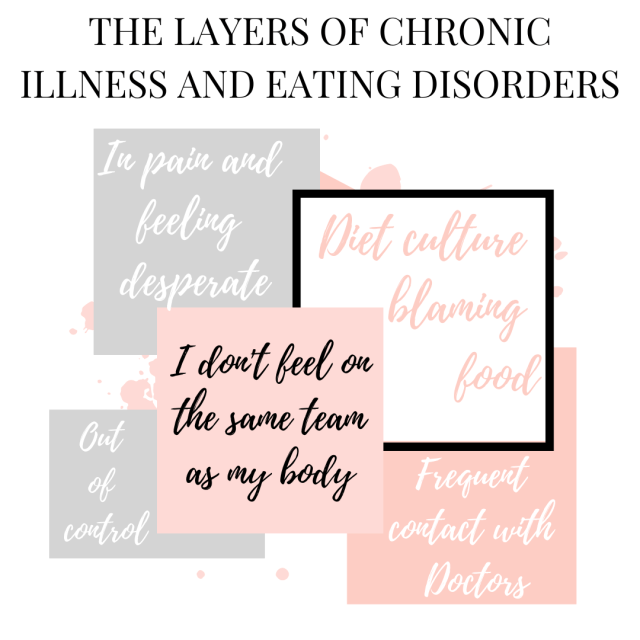 When we think about the factors that contribute to an ED, it’s easy to see why this connection happens. The onset of a chronic illness feels like things are out of control. When people feel out of control they will try and use any means possible to feel like they are in the driver’s seat again. Food often feels like a way to do this. Much of eating disorder recovery is focused on making peace with your body, but that’s difficult to do when you’re in the middle of an experience where you feel like your body has betrayed you. Many people with a chronic illness feel like they are not on the same team as their body and find it hard to make peace with their body.

Those who suffer from a chronic condition will also have the added burden of finding themselves in the doctor’s office more often than before. This means that they are more likely to be weighed frequently and have discussions about the relationship between their height, weight and health, among other factors. All of which are known triggers for eating disorder thoughts. With a disorder that already feels lonely and isolating, a chronic pain diagnosis can make one feel even more different while seeking ED treatment.

If you or a loved one are dealing with a chronic illness that is either causing or promoting disordered eating, there is hope for treatment management, but your path is not going to look like someone who doesn’t struggle with their relationship with food. First, you have to work really hard to differentiate between your “eating disorder self” versus your “chronic illness self.” This looks like making decisions related to food not based on losing weight or numbing out with food. You want the focus instead to be on reducing illness symptoms. Eating disorders can be sneaky and try and use the chronic illness as an excuse to restrict food again.

Another tactic would be to focus on what you can add in to your diet rather than what you can take out. This is following the intuitive eating principle of gentle nutrition, where we focus on what nutrient rich foods we would like to incorporate more of, rather than replacing food groups. In a chronic illness example, this might look like adding in more glasses of water a day rather than replacing juice with water. It might look like adding in anti-inflammatory foods like turmeric, greens, ginger and fish to the food you’re already eating, rather than replacing carbs with those foods. Anytime we are starting to think about food removal in ED recovery, we have to be very careful and make sure we’re still prioritizing ED recovery in the chronic illness journey.

This site uses Akismet to reduce spam. Learn how your comment data is processed.